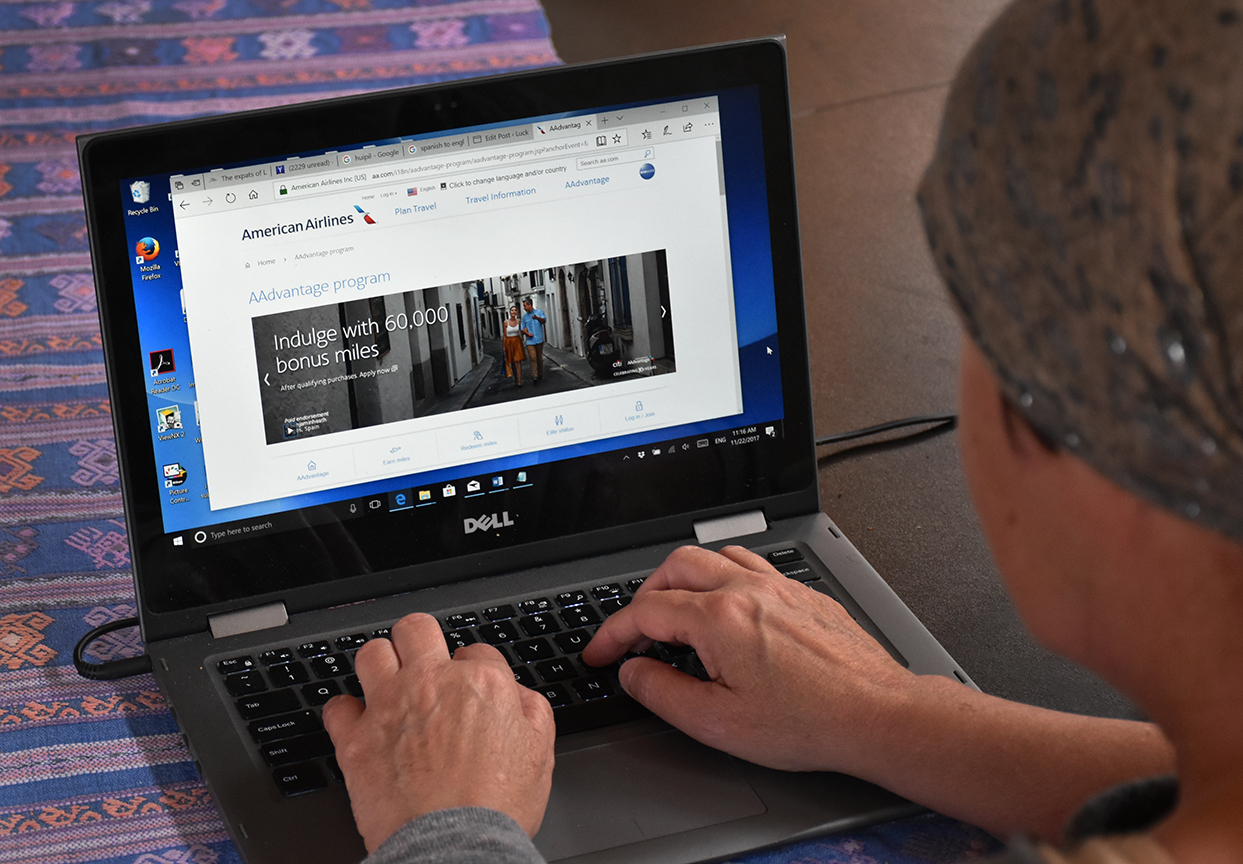 We try to use airline miles for our flights as often as we can. If we use money to pay for flights it’s almost always because we have a particular date requirement that we need to satisfy or we are traveling during a peak period and there are no discount mileage fares available. This article will talk about the basics of using airline miles frugally to give you the most benefit from your miles. Check out our other article here on how to use airline mileage plans and accrue lots of miles.

Know what a “low mileage” fare is

You need to become informed about what a “low mileage” fare is for each airline and for each destination area. Each airline has categories of fares in their mileage plans. For example, American Airlines has “AASaver OffPeak”, “AASaver”, and “AAnytime” levels. AASaver Offpeak from Portland to Mexico has a best rate of 12500 miles. AASaver is 15000 miles and AAnytime is 25000 miles.

Airline mileage plans typically break up destinations into regions based on flight distance. For example, Asia Region 1 (Japan, Korea, etc.), Asia Region 2 (Thailand, Malaysia, etc.), Central Asia (India, Sri Lanka, etc.), South America Region 1 (Ecuador, Colombia, etc.), South America Region 2 (Chile, Argentina, etc.), Central America, and so on. This creates some unusual mileage rates which don’t seem to make sense, such as flights to Guatemala having the same mileage rate as Panama City, even though the flight distance to Panama City is 845 miles further. We have a spreadsheet which lists the cheapest fares we usually see for each airline mileage plan category to each region.

Know what airline mileage points are worth.

We use a general valuation of $.02 per mile to calculate the value of airline miles, although some airlines require more miles for the same destinations and so the value of their miles is less and some airlines have higher value miles. This is useful when deciding whether to use miles at all. Usually airline mileage rates for a particular flight track fairly well with the price using money, however sometimes you will see a large disparity between the two. If the cost in dollars is much cheaper, then don’t get stuck on always using your miles for flights. Also keep in mind that when you pay in dollars you are also earning more airline miles for the trip which is an additional bonus that has monetary value.

For example, let’s say you want to go to Thailand during a peak time and the only mileage flights you can find are for 50,000 miles one way, which is equivalent to about $1000. You find that you can purchase tickets for $800, and you would also earn about 7500 miles for the flight (value is $150), so the net cost for the flight would be about $650 for the ticket purchased with money. You are better off not using your miles and saving them for a better deal later.

Be flexible with travel dates

This is very important and one of the benefits of being retired or semi-retired, because we often are able to manipulate our schedules to travel when we want.  Often there are cheaper flights within a couple days either way of more expensive flights. Be sure when you are checking on airline mileage sites that you click on the option to view “flexible dates”   or “extended view” (or whatever they call it on the particular site) so you can view mileage fares for an entire month block. When we are deciding what dates we are going to leave on a long trip and return, the exact days are almost always determined by what days have the best airline mileage rates.

Some airlines, like Southwest, let you adjust your miles downward if lower mileage fares for the same flight on the same day become available. It pays to check back with Southwest occasionally after you have already booked a flight to see if the mileage rate has dropped. We have frequently been able to reduce our fares from Southwest by doing this. Other airlines usually charge a fee to cancel or change a flight. Occasionally you may find that a much cheaper flight becomes available near your original departure date and it may become advantageous to cancel your original flight, pay the fee, and book the new flight. This is usually only an option if the new flight is a lot cheaper, for example you have booked a flight for 30000 miles and a 15000 mile flight becomes available. The savings would be 15000 miles or about $300 worth of miles, so paying a $150 change or cancelation fee might be worth it.

Some destinations are just cheaper, due to higher volume of flights. You can adjust your travel plans to accommodate cheaper flights, such as flying to Cancun and traveling overland to Guatemala, rather than flying to Guatemala City directly. If you were planning to visit Belize anyway a few days on the Mexican coast might be a nice addition to your trip.  Flexibility like this is one of the benefits of being able to travel for longer periods of time.

Don’t torture yourself for the lowest mileage flights

Sometimes you can save money (or miles) by booking two or more flights to your destination with different airlines.  The caveat to this is that each airline in the chain has no responsibility to make good on a missed flight due to the other airlines being late.  So, for example, you book Spirit from New York to Miami and American from Miami to Bogota.  If Spirit is late, or cancels the flight to Miami, and you arrive too late for your American flight, then you have no real recourse. American doesn’t “owe” you a free flight to Bogota because they weren’t responsible for you missing the flight.  If you have booked both legs of the flight from American and they caused you to miss the flight, they would have to give you a free flight to get you to Bogota.  This is the main reason for not booking your own multi-carrier trips.  If you do choose to do this, make sure you leave lots of time between flights to allow for delays at each stage of the trip.  You may also want to use some of your money savings to pay for travel insurance with “missed flight” coverage, particularly if you have booked several multi-carrier flights on your trip.

Another complication with using multiple carriers is dealing with baggage issues, such as multiple baggage fees, different baggage policies, and the hassle of having to re-check bags with each airline at each stage of the trip.  We would recommend having only carry-on bags if you plan to use different carriers for each leg of the trip.

At the time this is being posted, Citibank has an American Airlines Advantage credit card which offers a 10% discount on miles used for American flights when you use the AA Advantage card to pay for additional travel charges for the flight (such as taxes, etc.).  We weren’t even aware of this benefit when we got the card, but we received a nice surprise when we were notified that we had been refunded 2500 miles from our recent flight to Guatemala.  We will be on the lookout for offers like this from other credit cards in the future.  Southwest Airlines has a companion fare offer for Southwest cardholders who earn 110,000 miles in one year.  That would be difficult to accomplish with flights alone, but fortunately Southwest includes miles you receive as bonuses for signing up for Southwest credit cards.  If you happen to have a semi-retirement business, you can sign up for both a personal and business card from Southwest and by taking advantage of their best credit card bonus offers, you may be able to fulfill the 110,000 miles requirement without too much additional expense.  This entitles you to unlimited companion fares for the remainder of the year for which you fulfill the monetary requirements, plus the following year.  The great thing about this deal is that the companion fares apply also to flights paid for with miles.

Know when to book your flights

This is a frequent topic on airline savvy websites. One thing that is clear is that booking far in advance doesn’t always give you lower fares. Often cheap fares open up as your travel date nears. Many airline experts say the sweet spot for booking cheap flights varies by region. Most say the sweet spots are around two months prior to departure for domestic, Canada, Mexico, and Central America flights, three months for Europe, Asia, and the South Pacific, and four months for Africa and the Middle East. These times are for tickets purchased with money, which may not necessarily be the same for tickets purchased with miles.  Ger feels that the sweet spot for domestic mileage fares is more like six weeks prior to departure.  It could be that airlines evaluate flights and lower ticket prices for those people purchasing with money first in order to fill planes and then if they aren’t filling rapidly enough they may open up more cheap mileage plan seats later. We don’t really know for sure, but this sounds reasonable. In any case, depending on the region you plan to visit, use the estimates above as a starting point and add a few weeks or a month in either direction.

Another topic which is often discussed is on what day you should purchase tickets.  We have seen several sites which recommend buying tickets on Tuesday or Wednesday afternoons, but Ger doesn’t agree. She says she has gotten great deals on Sunday mornings and other times which were supposedly the worst times to be looking. Take all the so called “rules” with a grain of salt.

Bottom Line: Be informed, be vigilant, and be ready to pounce

Low mileage fares can appear and disappear quickly on the airline sites, so if you aren’t checking the sites fairly often during the “sweet spot” when deals are happening you will miss some of them.  Also, when you see a low mileage fare, if you wait too long to snap it up you may lose it to someone else.  In order to be able to purchase a fare with confidence that you got a good deal you need to first do your homework and learn what constitutes a good deal for the airline mileage plans and destinations you are booking. Talk with your partner or spouse (if you are not traveling alone) and agree on a window of acceptable travel dates and prices (in dollars or miles) which are acceptable, so you can book them quickly if they appear.