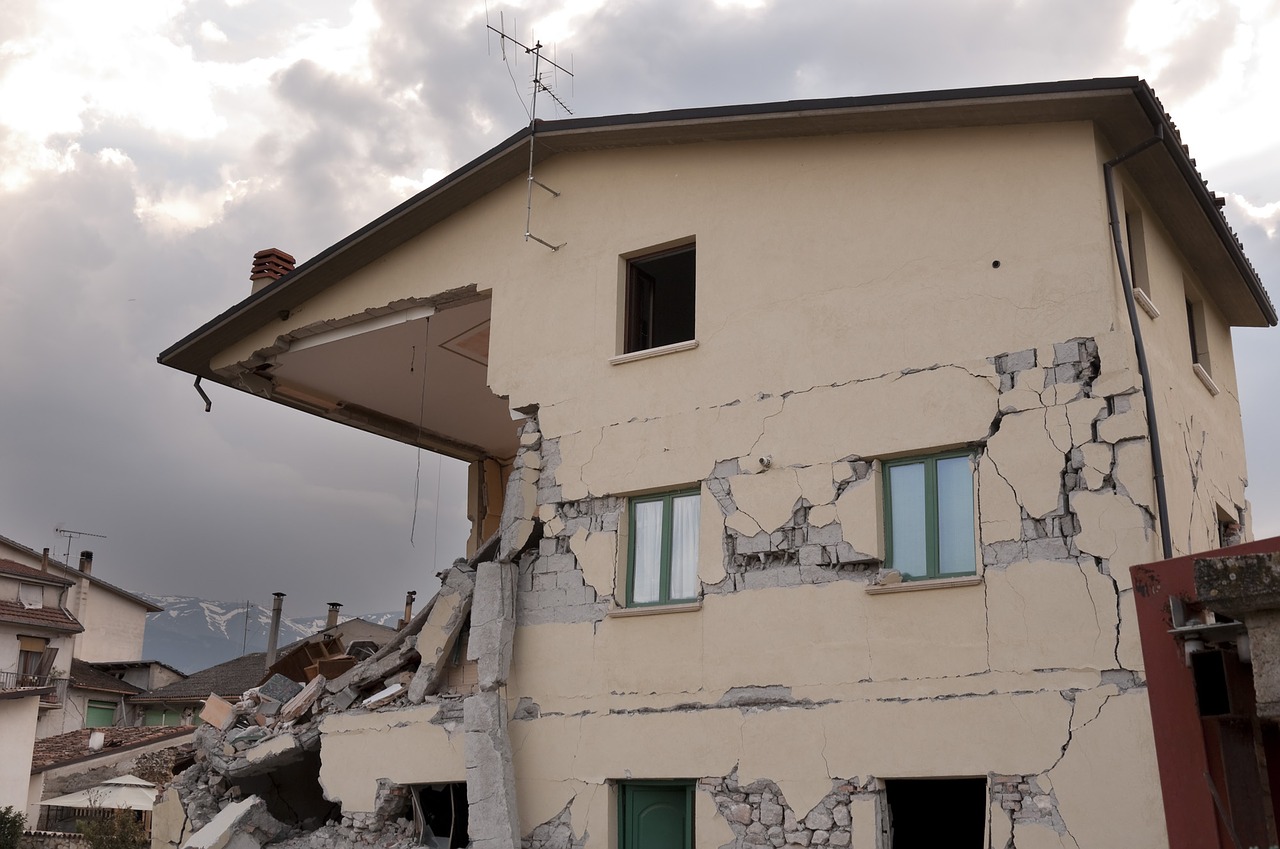 Hopefully you will never be exposed to a natural disaster like a tsunami, earthquake, or hurricane during your travels, but if you travel long enough, particularly in higher risk areas, you may eventually encounter one of these.  Here are some guidelines to help you avoid harm.

After the Indonesian tsunami that killed 230,000 people in 2004 and the 2011 tsunami in Japan that caused a nuclear power plant failure contaminating a large area of Japan, people are more aware now of their potentially deadly effects.  Tsunamis are caused by earthquakes which occur in the ocean floor which generate chains of large waves.  The actual earthquake is sometimes felt on land, often long before the tsunami arrives.  That’s the first warning sign.  If you feel an earthquake and you are in a low-lying coastal area, get to high ground immediately. You don’t know if the earthquake happened in the ocean or inland and you also don’t know how far away, so better safe than sorry.  Hopefully, the next warning sign would be tsunami warning system sirens going off.  Since tsunami warning signals may be easy to misinterpret, it’s probably best to assume if any sort of siren goes off you should just get to high ground and stay there. Tsunami waves usually occur in a chain which can last up to several hours and the first wave is typically not the largest, so don’t assume if a big wave passes through that you are in the clear. If no warning system exists and you didn’t feel an earthquake the next sign you “might” see is the “drawback”, the ocean receding as the trough leading the first big wave arrives.  The ocean floor may recede dramatically, exposing reefs and fish.  You will only see the drawback if the trough of the wave arrives first. Videos taken by tourists before the Indonesian tsunami hit showed a huge drawback and many tourists were just standing there trying to understand the strange phenomenon before the first waved became visible and they had no time to get away. Unfortunately, if you see the ocean floor receding and you are at the beach, you only have seconds or, at most, a minute or so, to get to someplace high up before the crest of the first wave arrives. So, if you see the ocean receding for any reason, run like hell and find a high place.  Most accounts say that the arriving wave will create a loud “roaring” sound, like a jet engine.  If you hear that sort of sound coming from the ocean, head for high ground.  If you have no time to get to high ground, the next best choice is to find a sturdy building and get to the top of it.  If there are no buildings the next best option is to climb a sturdy tree that looks like it won’t get swept away.  If you get caught in the water, try to get on top of something floating that you can use for a raft.  You want to avoid being in the water where you can get crushed by debris caught in the wave. How high do you need to get?  Ideally at least 100’ above sea level would be good, or, if there is no high ground available, move inland at least 2 miles or more.

Our daughter Megan has been fortunate in that she always seems to arrive in places just after a natural disaster has occurred and not during it. She arrived for her study abroad in Valparaiso, Chile a few months after the 8.8 earthquake in 2010.  The main things to consider about earthquake safety are whether they commonly occur in the area you’re staying, how to choose a relatively safe dwelling, and what to do if one happens.  Earthquakes occur along “faults”, boundaries where two plates of the earth’s crust collide. If you look at maps of earthquake fault lines you will see that there are certain countries which are heavily prone to earthquakes.  Of the 39 strongest listed earthquakes, most of them occurred in countries that lie on the “ring of fire”, a roughly circular set of fault lines which surrounds the basin of the Pacific Ocean, including the countries of western South America, Chile, Peru, Ecuador, Colombia, stretching up through Central America to Mexico, west coast of the USA, across the Aleutian island chain of Alaska, down to Japan,  Japan, China, Indonesia (especially Sumatra) and across to Tonga.  Another active zone extends through Bangladesh, Northern India, Afghanistan, Iran, Turkey, Greece, and Italy.

Evaluate the place where you will be staying

Is it possible to evaluate your dwelling to determine if it’s the kind of building that will be “safer” in an earthquake?   Maybe.  I remember watching an apartment building being constructed in Turkey in the 80’s.  The walls were constructed out of grey cinder blocks (the kind with the hollow centers, stacked vertically and filled with cement to join them.  I didn’t see any steel rebar being used to reinforce them and help withstand horizontal movement in case of an earthquake.  I remember thinking that if I was in that building when an earthquake hit, I’d be buried in seconds. After the 1999 earthquake in Turkey killed about 17000 people and it came out that a lot of the deaths were due to poor building construction techniques I wasn’t surprised.  I’d definitely think twice about wanting to stay in any building with walls made of brick or concrete blocks or similar masonry-type materials if I’m in an earthquake-prone region.  In Turkey it was pointed out that some of the bricks were made on-site and that these low quality bricks basically turned into sand during the earthquake.  A single level wood structure would certainly be preferable to one made of brick or cement blocks.  Even a two story wood building would be preferable to me.  You may be able to make some educated guesses about the way the building you are considering living in may be constructed by examining the wall and roof structure and the look of the materials used. You definitely would prefer to avoid anything that might become pancaked in an earthquake.  It’s interesting that Megan said there seemed to be remarkably little building damage in Valparaiso when she arrived there, considering it was a fairly close 8.8 magnitude quake.  It may be that Chileans have learned from previous frequent quakes to make their buildings more earthquake proof.

What to do during an earthquake

Should you experience an earthquake the standard recommended instructions are:

Normally I wouldn’t think of addressing the topic of volcano safety, but it turns out we are actually planning on visiting several countries where there are active volcanoes very close to the towns we will be staying.  Sure, the odds of a volcano erupting while you are there might seem very remote, but then I remember standing on the roof at my workplace in Portland in 1980 watching the huge plume of ash fill the sky as Mount St. Helens blew its top and I realize that volcanoes erupting nearby really can happen in your lifetime. Fortunately, Mount St. Helens was closely monitored and there were many signs that an eruption was imminent, but still many people ignored the warnings and unfortunately they died because of it.  It’s best to be aware of the potential dangers of any nearby volcanoes and don’t ignore any of the warnings to evacuate or move a safe distance away if you are instructed to do so by local authorities.  If you are one of those people who gets a kick out of climbing active volcanoes, then there’s not much I can say to improve your chances of a long life.

Hurricanes are relatively easy to avoid because you get a lot of advance warning.  The major problem with hurricanes is that the path of a hurricane is only roughly predictable, so many people will take the risk that the hurricane won’t pass over the place they are staying, and sometimes they guess wrong.  If you are advised by local authorities to evacuate, I recommend doing so.  If you decide to stay, make sure you are someplace far away from the potential storm surge on the coast side, away from any large trees or other structures that can crush your dwelling, or, even better, plan to be staying in some sort of hurricane-proof bunker while the hurricane passes over.  Make sure to stock up on water and provisions and anything else you might need.  Just assume that you might not have access to outside food, water, power, fuel, or navigable roads for at least a week after the hurricane hits and plan accordingly.

In the aftermath of a hurricane or any big storm with heavy rains you may also encounter flooding and landslides or mudslides.  In fact I would hazard a guess that ofgten more people are killed by mudslides after hurricanes than are killed by the actual hurricane itself.  Hurricane Earl, for example, which passed over Belize just before my daughter Megan arrived, killed 13 people from storm effects in the Dominican Republic, and 54 from in Mexico from mudslides due to heavy rains. If you are staying in low-lying areas, where flooding may become a problem, you may want to move to a higher location before the storm hits.  You should also avoid being in a dwelling downhill from deforested slopes which have the potential for mudslides.  After the storm you may want to wait several days before travelling  in order to let the roads dry out to avoid roadway collapses and slides while you are travelling on them.