On two previous trips to Mexico we had bought Ger silver necklaces that she really loved, so we planned to visit Taxco, the silver capital of Mexico, near the end of our trip, to shop for silver jewelry for Ger’s Christmas\Birthday\Anniversary presents and maybe a few belated gifts for other family members. The journey from Puebla to Taxco required taking a bus from Puebla to Mexico City’s south bus station, called Taxqueña, and from there taking a different bus to Taxco.  The whole process was very efficient because we didn’t have to travel between bus stations in Mexico City.  We left Puebla at about 9:30am and arrived in Taxco at 3:30pm.  At the bus station there was a line of local taxis, all vintage white Volkswagon Beetles.  My first reaction was shock that they had chosen the VW bug for their taxis because it’s hard to find a car with less luggage room than the Beetle, but as we soon discovered, there is a novel solution…they remove the front passenger seat and pile the luggage there.  We crammed in the back and gave the directions to the driver and were at our AirBNB in five minutes.  This turned out to be a lovely spacious suite with two beds, private bath, stairs leading from inside up to an unfinished rooftop terrace with an great view…no kitchen, but we had a wash sink and a counter with a hot water kettle so we could make hot drinks. 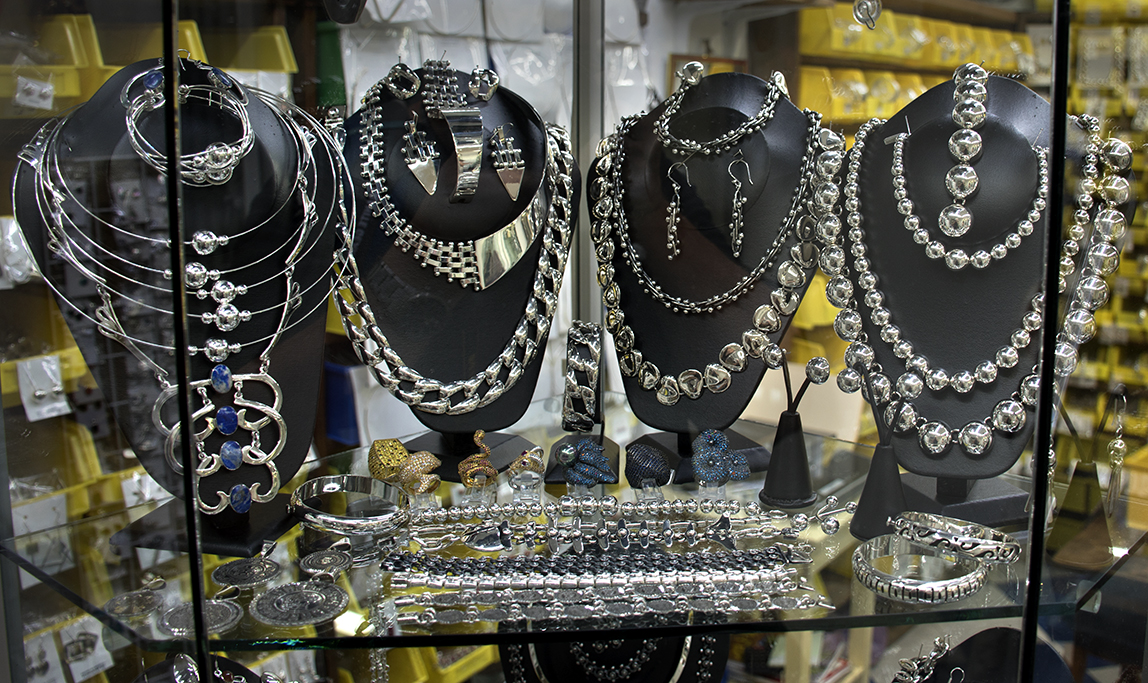 When I say that Taxco is the City of Silver I’m not exaggerating…there are hundreds of silver shops in the town…and over the course of our week there I think we visited most of them that were located within a half mile of the zócalo.  The place we were staying was on the south side of the centro, only about 1\3 mile from the zócalo, which in Taxco is a relatively small but very picturesque square with the massive Santa Prisca Church occupying one side and restaurants and silver shops taking up most of the rest of the space.  The silver shops on the zócalo are the most expensive in town with prices similar to what you would pay for the same silver jewelry at “decent” prices in the U.S.  But we were not in Taxco to pay prices similar to those in the U.S., we were looking for bargains.  To get good prices you need to get away from the zócalo and check out shops on the back streets.  While researching where to get the best silver deals in Taxco we read several articles which said to get good prices you should visit the “tianguis” which are open air markets (actually many are inside) where there are lots of small stalls with many sellers.  We visited many of these and found the quality of the silver there not very good, similar to what you would find at cheap silver stores in malls in the U.S.

We spent the first couple days just getting a feel for price variations and trying to identify shops which had pieces that we liked.  We were looking for more unique pieces that we haven’t seen in the U.S. and were surprised at how many of the shops were selling jewelry that looked like what we could find at home.  Ger has a bit of a Frida Kahlo obsession and one of the necklaces that drew her attention was a reproduction of a thick silver mail choker which Frida Kahlo wore which we first saw at an expensive shop on the zócalo, selling for about 18,500 pesos ($1000 US).  We hadn’t seen anything like this in the US before and didn’t find anything like it on ebay either.   But it was too expensive.  Eventually we saw the same design in several other stores, most thinner or with lower quality workmanship selling for less, but not as impressive as the original necklace we saw.  Eventually we stumbled on a shop only three blocks from the zócalo that had a very close approximation to the original piece she had admired.  We were able to negotiate the price down to 6300 pesos ($340 US), or roughly 1/3 the price of the other necklace.

Most of the shops sell their silver jewelry by weight.  When you ask the price they pull out a scale and weigh it and quote you a price. Some of the expensive shops just have fixed prices and don’t weigh the jewelry.  If you ask to see the weight (in grams) you can divide the price by the weight to get the cost in pesos per gram.  The trick is that there is no standard price per gram, so the weight doesn’t really mean anything until you start comparing prices from many shops.  We found that at most of the shops that sold nicer jewelry the prices ranged from a low of 20 pesos per gram to a high of 40.  Obviously, the degree of workmanship in a particular piece is an important factor in the price as well, so that must be taken into account.  For example, Ger’s Frida Kahlo necklace cost us 24.9 pesos per gram, but the workmanship required to produce it is high, so we feel the price was excellent.  We also bought a couple nice Cartier link silver chains which are probably mass produced for less than 20 pesos per gram, but these also require much less labor to produce.  Also, the market price of silver is an ever changing thing, so the price can fluctuate widely over time.  When we bought Ger’s last silver necklace in Cabo many years ago, silver prices were three times higher than during our current trip.

One name the comes up all the time in Taxco when you talk about silver is William Spratling, a US architect who moved to Mexico in the 1930s and began designing silver jewelry and was instrumental in establishing Taxco as a silver mecca.  We were able to see some original Spratling jewelry at the same high end shop where we saw the first Frida Kahlo necklace.  These pieces were not for sale.

Taxco is a charming and picturesque colonial town built on the steep slopes of a mountain and every place you go is either uphill or downhill.  We ended up getting plenty of exercise going up and down the hills during our week there.  The streets are narrow and seem to be filled mainly with people and white VWs which are often passing you with only inches to spare.  Despite its popularity as a tourist destination from Mexico City we were disappointed in the food choices in the town.  As usual we went to Trip Advisor to try to choose good restaurants with decent prices and, sadly, several of those we tried just weren’t very good.  We only came up with two restaurants that we’d put on our recommended list.  Our favorite, where we ate twice, is S Cafecito, which is located on a steep footpath just above the zócalo.  Surprisingly, we found that the restaurant is in a house formerly owned by William Spratling and it also has a gallery of silverwork and some nice artwork.  The first visit we had two different lasagnas, one with mole and the other with meat Bolognese, both made with fresh pasta and excellent.  The second visit I had lasagna again and Ger has ravioli…again both were excellent.  The prices were ridiculously cheap for the quality, about $5 per entrée.   The second recommendation, although less enthusiastic, is El Adobe where I had a nice plate of tacos and Ger had a Caesar salad which was prepared tableside with great aplomb and ineptitude by a waiter-in-training who was trying to squeeze lemons and crack eggs using only utensils and kept losing control of them into the bowl.  The end result actually tasted very good, even though it took the poor guy about 20 minutes to prepare the masterpiece with a bereaved older waiter looking on from ten feet away.

We decided to stop into Bar Berta on the zócalo to try their famous drink “the Berta”, mainly as an homage to my cousin Berta.  We took our drinks upstairs where we had a beautiful view of the zócalo below and the church as the sun was setting.  The location is first rate, but the drink wasn’t.  It tasted like a margarita with some soda water added to it.

The day before leaving I decided to hike up the hill to the Cross, a huge Christ statue with outstretched arms at the top of the mountain above the town.  Suffice it to say that this was steep uphill slog for over an hour and I did it without stopping, which made me realize just how much my fitness had improved during the course of our trip.  I stopped to take some photos of the town below and headed back down just as it started to get dark.

The next day we flagged down a white VW bug and headed to the bus station for our trip to Mexico City.  Taxco is a wonderful scenic place which should not be missed, especially if you are interested in buying some silver jewelry.