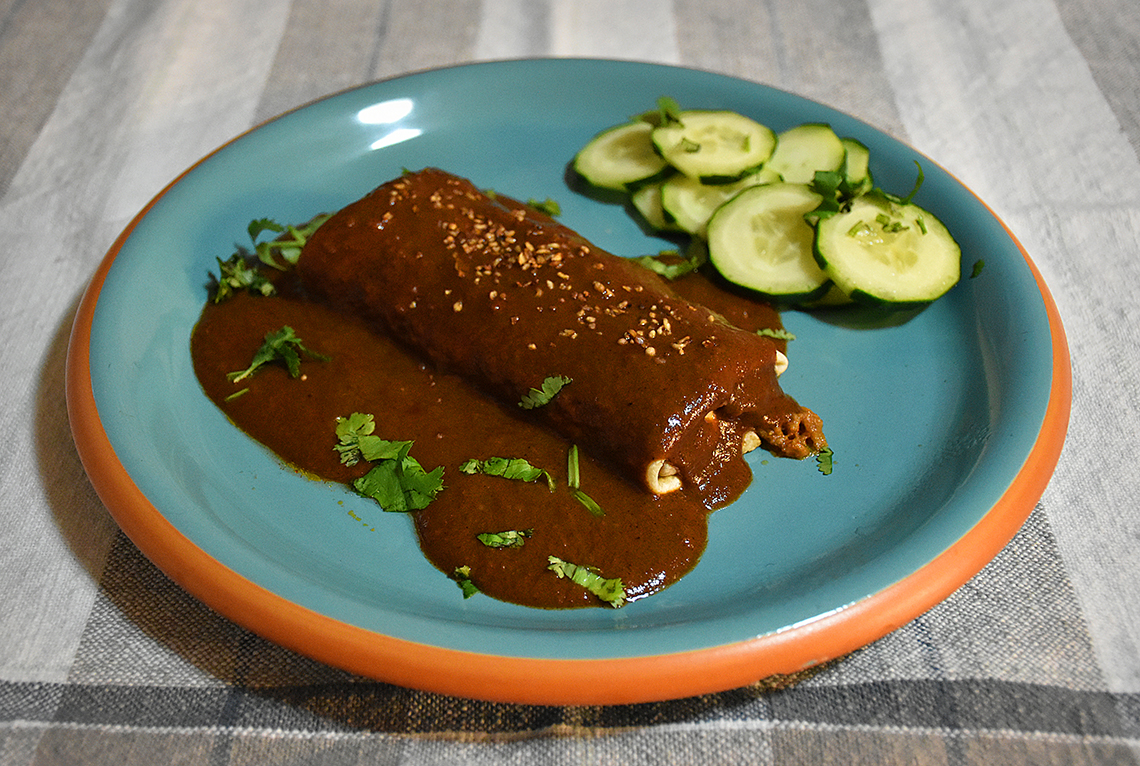 I first learned about mole from Diana Kennedy’s cookbook, The Art of Mexican Cooking. At age 95, she has spent most of her life living in Mexico and traveling to different areas to document regional recipes with ferocious attention to detail. She is often called a “culinary anthropologist” and she approaches mole with a scientific attention to detail from sourcing the perfect ingredients to method of preparation. From her writing I developed my first fascination with mole.

On previous trips to northern Mexico I had made it a point to find the best moles I could at whatever restaurants were serving them. But our current trip itinerary was going to take us through the two most famous mole regions of Mexico, Oaxaca and Puebla, and I was determined to use this to my advantage and taste and learn as much about how to make a great mole as I could. But nothing is ever as perfect as you want it to be and so it went with my quest for the perfect mole education experience.

Legend has it that the complex blend of chocolate, spices and chiles called Mole Poblano was created by nuns at the Convent of Santa Rosa in Puebla to honor a visiting archbishop. The nuns had little food available and they threw together whatever they could find to make a sauce for a turkey they had, and the archbishop loved the meal, and thus mole was born. Whether this story is accurate…who knows? Today both Oaxaca and Puebla claim that they are the places in Mexico where mole originated. No doubt mole recipes have gone through many iterations and modifications since that time, so who knows how close the current incarnations are to the original. Whatever the origins, mole is now considered the national dish of Mexico.

There are no shortcuts to making true mole – it takes time (sometimes years) and patience to develop the layers of flavor. In the vein of Julie and Julia (even though Julia Childs wasn’t very impressed with Julie), and since I was lucky enough to be in the home of great mole, my fantasy was to learn from a local mole cook who was a master by virtue of her passion, age and practice. Easier said than done.

After we arrived in Oaxaca, I spent the first few days checking out my options, but all I could find were pricey full-day classes for tourists that seemed to put more emphasis on the entertainment value (hours spent meandering around the market with the instructor, tasting mezcal, drinking hot chocolate, etc.) than cooking. Often the instruction in mole was only one dish among several others being taught during the day. I didn’t really want to spend a lot of time learning how to make tortillas or hot chocolate from scratch either. I had taken a class like this in Ireland years ago and that’s enough for a lifetime for me.

By far the best mole I had tasted in Mexico so far was at Kokono in San Cristobal. Kokono is run by owner/chef Claudia Ruiz Santiz who comes from Chamula. She celebrates the food of Chamula which in lesser hands might seem plain. Everything is locally sourced and she is part of the Slow Food network. I had chicken mole with savory bread pudding, peas, squash, raisins, plantains and slices of hard boiled egg.   It was excellent. I could see Claudia working in the kitchen and this made it even more special.

Before opening Kokono, Claudia worked at some of the best restaurants in Mexico, including Pujol in Mexico City. Pujol makes an art form of mole sauce. In a review, one diner said they were served a mole which was 1258 days old alongside a batch that was made fresh that day, so they could compare the two. The older mole was more complex and delicious they said. The moles were served by themselves (no chicken or turkey, just sauce) with fresh tortillas. When I read this I was reminded of the Brendan Behan story, The Confirmation Suit, where he said his grandmother’s soup was forever on the fire (not actually for consumption, just to keep frugal Aunt Jack quiet). In reality the mole isn’t really 1258 days old…well maybe a miniscule amount…they add the leftover mole from each day’s new batch to the batch of older mole, so all the mole in the pot isn’t actually that old. In fact, I would venture that very little of it is more than a couple months old.

My search for a mole class continued. Online, I found a 2012 article from Atlantic magazine about a wonderful all-day mole class the writer, Grace Rubenstein, took from a 71 year old grandmother of eight named Soledad Ramirez Heraz in her home outside of Oaxaca. Soledad didn’t have a website or business name and the author only found out about her from an earlier post by Grace Meng in a blog called One Fork, One Spoon. I found this article and it sounded like just what I was looking for. The Atlantic article provided email information for two of Soledad’s children. I sent an email to both to see if Soledad was still doing the classes but unfortunately I never received a reply, and I wasn’t able to find any other information about how to contact her. At this point she would be in her late 70’s so she may have stopped doing the classes. I hope she is still going strong.

Soledad started cooking at age nine in her hometown in the mountains south of Oaxaca city. Her cooking helped her widowed mother support the family. As an adult she ran a small restaurant for several years in Oaxaca city. She loved this and did it until her husband insisted she stay home with the children.   Later she spent two decades teaching cooking to foreign travelers and chefs at the Instituto Cultural de Oaxaca.   By 2010 she was retired and offering private lessons in her home in the hills just outside Oaxaca to students who could find her. She cooked the way people cooked before the Spanish came to Mexico.   Although she was a master of all the dishes that make Oaxaca famous, her specialty was mole negro. For anyone lucky enough to get a cooking lesson from Soledad they had to make their way to her home and plan to spend a full day there because that’s the time it took her to make mole. She assembled her ingredients including four kinds of dried chilies, raisins, almonds, onion, ginger, garlic, tomatillo, plantains, chocolate, tomato, herbs and more.   Her recipe was very precise (down to the exact number of cloves and peppercorns). She started by boiling a chicken for broth. Then she separately toasted the herbs and fried the vegetables. Fried bread and plantains can be added to give the sauce substance. The chiles took special preparation. They had to be veined, seeded and toasted to a crisp but not burned. The many chiles that grow in the area around Oaxaca give the mole its identity. The special chile for Mole negro is called chilhuacle. Once all the separate ingredients are prepared and toasted they are ground together. Cooking should not be rushed. The final mole must be balanced, not too sweet and with no one ingredient overpowering the others. Soledad felt that if the cook has passion for her work, this makes the food taste better (‘Like Water for Chocolate’). She said cooking should be performed, like the rest of our lives, with much love.

Oaxaca is a town with an abundance of chocolate shops. Because chocolate is a an ingredient in mole, it is common to find these shops also selling mole pastes or powders which incorporate their own chocolate. Most of these shops allow tasting and I had tried moles from many of them. One that I particularly liked was La Soledad Chocolates and Mole on Calle Mina. They sell sealed pre-packaged mole pastes, suitable for bringing back to the U.S., with many different types and sizes available, including Negro, Rojo, Coloradito, Verde and a few others. You often hear about the “7 Moles of Oaxaca” which include these four types, but it is not always clear what distinguishes the first three and Mole Poblano (the mole specific to Puebla) from each other. Most of them share a majority of ingredients, with the main differences being the types of chiles used in each and the addition of things like plaintains (often added to the Rojo and Coloradito) and use of more or chocolate in the recipe. Mole Poblano, is often compared to mole Rojo from Oaxaca, but others say it is closer to Negro. At La Soledad the mole Negro is rich and very sweet with a strong chocolate flavor. I found the Rojo to be more to my liking, with less sweetness and chocolate. However, my favorite there was the Coloradito which was even less chocolaty.

Even though I was a bit dubious about using pre-prepared mole paste, I decided to buy some and experiment. I bought a container of the La Soledad Mole Coloradito and followed the instructions on the container which said to add the mole to roasted tomatoes and chicken stock. I dry roasted the tomatoes and added mole paste with three times the amount of chicken stock and then added cooked chicken. We were pleasantly surprised at how good the mole tasted…not as good as Kokono, but better than some of the moles we’d eaten at Mexican restaurants in the past.

In the end, I never found my cooking class. We are returning to Portland with two kilos of La Soledad mole pastes in our luggage. I found La Soledad mole paste at an online store in the U.S. but a kilo would cost me $38 (including shipping) from this store and our cost in Oaxaca was about $5, so it’s worth the extra weight. It’s a cop out until I learn to make my own mole at home, and I’m pretty sure Diana Kennedy, Senora Soledad and any purist would not be impressed, but it still tastes pretty good and is a lot less work.